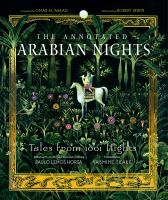 A magnificent and richly illustrated volume--with a groundbreaking translation framed by illuminating commentary--of the most famous story collection of all time. A cornerstone of world literature and a monument to the power of storytelling, the Arabian Nights has inspired countless authors, from Charles Dickens and Edgar Allan Poe to Naguib Mahfouz, Clarice Lispector, and Angela Carter. Now, in this lavishly designed and illustrated edition of The Annotated Arabian Nights, the literary historian Paulo Lemos Horta and the poet and translator Yasmine Seale present a splendid new selection of tales from the Nights, featuring treasured original stories as well as later additions including "Aladdin and the Wonderful Lamp" and "Ali Baba and the Forty Thieves," and definitively bringing the Nights out of Victorian antiquarianism and into our own time. For centuries, readers have been haunted by the homicidal King Shahriyar, thrilled by gripping tales of Sinbad's seafaring adventures, and held utterly, exquisitely captive by Shahrazad's stories of passionate romances and otherwordly escapades. Yet for too long, the English-speaking world has relied on dated translations by Richard Burton, Edward Lane, and other nineteenth-century adventurers. Seale's contemporary and lyrical translations break with this masculine dynasty, finally stripping away the deliberate exoticism of Orientalist renderings while reclaiming the vitality and delight of the stories, as she works with equal skill in both Arabic and French. included within are famous tales, from "The Story of Sinbad the Sailor" to "The Story of the Fisherman and the Jinni," as well as lesser-known stories such as "The Story of Dalila the Crafty," in which the cunning heroine takes readers into the everyday life of merchants and shopkeepers in a crowded metropolis. Grounded in the latest scholarship, The Annotated ARabian Nights incoporates the Hannah Diyab stories, for centuries seen as French creations but now acknowledged as being rooted in the Arbic narrative tradition. Tracking the astonishing twists and turns of the Night's evolution, Horta also offers comprehensive notes on just about everything readers need to know to appreciate the tales in context, guiding us through the origins of ghouls, jinn, and other supernatural elements that have always draw in and delighted readers. Beautifully illustrated throughout with art from Europe and the Arab and Persian world, the latter often ignored in English-language editions, The Annotated Arabian Nights expands the visual dimensions of the stories, which have always been--and still are--in dialogue with fine artists. With a poignant autobiographical foreword from best-selling novelist Omar El Akkad and an illuminating afterword on the Middle Eastern roots of Hannah Diyab's tales from noted scholars Robert Irwin, Horta and Seale have created a stunning edition of the Arabian Nights that will enchant and inform both devoted and novice readers alike. --