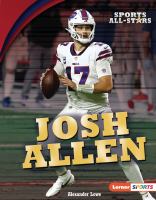 Book
In 2020, quarterback Josh Allen led the Buffalo Bills to their first division title in 25 years. Allen grew up on a farm in California and starred at the University of Wyoming before joining the NFL.