The exorcism of God 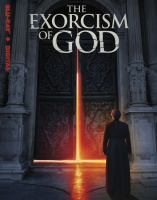 Blu-ray
Scheduled release date: April 19, 2022.
Father Peter Williams, an American exorcist, hides a shocking secret: possessed by a demon he was trying to expel, he committed a terrible sacrilege. To atone for this sin, Peter devotes his life to charity work in a small town in Mexico. Eighteen years later, his deeply buried secret comes to light when the demon from his past returns, possessing a girl and unleashing a deadly disease. Now Peter must choose between saving his soul and saving the people he loves most in one final, epic battle against the evil within.