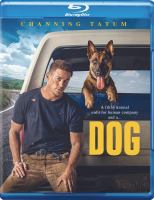 Blu-ray
Scheduled release date: May 10, 2022.
Briggs, alongside his companion Lulu, A Belgian Malinois haul ass down the Pacific Coast in time to catch their best friend's and handler's funeral. One of them has a week to live, the other lives like every day are his last.