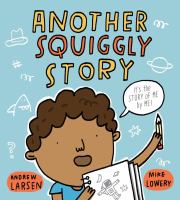 Book
"When we first met him in Kindergarten in A Squiggly Story, this boy figured out how to tell a story by writing it in squiggles. Now he's in Grade 2, and he's writing another story -- this time, an autobiography for school. Readers will delight in following along on this first-person journey as the boy works through the basic steps for crafting a piece of writing to arrive at his very own Story of Me by Me. With direction from his teacher, advice and support from his sister, input from his best friend, and lots of work and thinking on his part, the boy goes from "How am I going to do that?" to having a story, and, as his friend declares, being "pretty good at this!""--