The lioness : a novel 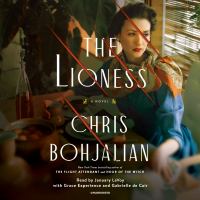 "Tanzania, 1964. When Katie Barstow, A-list actress, and her new husband, David Hill, decide to bring their Hollywood friends to the Serengeti for their honeymoon, they envision giraffes gently eating leaves from the tall acacia trees, great swarms of wildebeests crossing the Mara River, and herds of zebra storming the sandy plains... The wealthy Americans expect civilized adventure: Fresh ice from the kerosene-powered ice maker, dinners of cooked gazelle meat, and plenty of stories to tell over lunch back on Rodeo Drive. What Katie and her glittering entourage do not expect is this: A kidnapping gone wrong, their guides bleeding out in the dirt, and a team of Russian mercenaries herding them into Land Rovers, guns to their heads. As the powerful sun gives way to night, the gunmen shove them into abandoned huts and Katie Barstow, Hollywood royalty, prays for a simple thing: To see the sun rise one more time."--