Catch the fair one 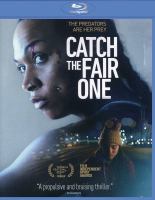 Blu-ray
Scheduled release date: June 7, 2022.
A former champion boxer embarks on the fight of her life when she goes in search of her missing sister.