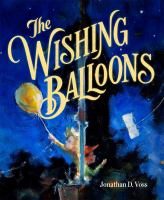 "A young girl named Dot is overjoyed when the moving truck arrives at the house down the street, and even more excited when a boy her age steps out, offering the prospect of a new friend. But Albert looks sad, and he won't reveal why. After many attempts to cheer him up, Dot walks away defeated. That night, a balloon with a note tied to its string taps her window. Unfolding the note, Dot finds a wish that Albert has written. This is her chance to make Albert happy -- she will (creatively) grant his wishes. Though as each wish becomes harder to grant, Dot learns the powerful lesson that sometimes being a friend means waiting until the people you care about are ready to reach out.