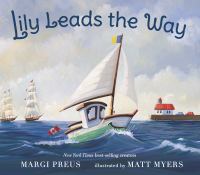 Book
"Lily the sailboat is small but sturdy, in a harbor full of enormous cargo ships, speedy fishing vessels, and bossy tugboats...Out on the lake, the tall ships are coming! To pass from the harbor to the lake, Lily must blow her horn and ask the lift bridge to rise...Finally, Lily slips under just before the bridge goes down, her sails fluttering with excitement as she spies the majestic barquentine, schooner, and other grand old ships heading toward the now-lowered bridge. Silently! How will the bridge know to rise? Can Lily save the day?"--