Where the sky lives 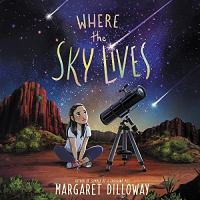 When life doesn't make sense, twelve-year-old amateur astronomer Tuesday Beals has always looked to the stars above Zion National Park, where she lives. Her beloved late uncle Ezra taught her astronomy, but now their special stargazing sites are all she has left of him, along with his ashes and a poem that may be a riddle. Then a new housing development next door threatens to ruin the night skies and her favorite astronomy spots. Desperate to focus on something besides the growing uncle-sized chasm between her and her mother, the park archeologist, Tuesday takes up photography with her best friend, Carter, after they find an abandoned camera. With this new way of seeing the universe, she tries to solve her uncle's riddle to save the land. But one day, a photo reveals clues about an endangered animal--one that could halt construction. Will the discovery be enough to save the park and keep the rest of her world from falling apart?