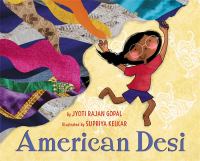 An American child of East Asian descent revels in dances, clothing, games, foods and other characteristics of both cultures, while blending them into what makes this American desi unique.