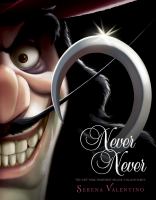 Cutthroat pirate James Bartholomew, who longs to return to Neverland where he was taken as a child, gets his wish with the help of the Odd Sisters and a bit of magic, but soon he discovers the high price he must pay.
Before Peter Pan and Wendy. Before the Lost Boys. There was just a boy named James who wanted to get back to Neverland. As a baby, James Bartholomew fell out of his pram and was taken to Neverland. James is claimed by his parents just shy of seven days--after which he would have officially become a Lost Boy. Once he returns to London, he never stops thinking about Neverland. As he grows up, he hates his life in London, and everything to do with growing up and eventually becoming a gentleman. So he seeks a position on the ship of the infamous pirate, Blackbeard. On Blackbeard's ship he learns to be a cutthroat pirate, and eventually becomes captain of his own ship, which James is determined to sail to Neverland. With the help of the Odd Sisters and a bit of magic, he just might get his wish. But returning to Neverland comes at a price--and now that he's grown up, the whole world seems to be rooting for his demise...