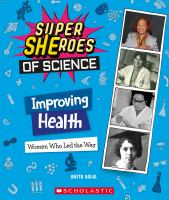 "This brand-new series highlights some of the major contributions women have made in the world of science.Women have historically been associated with caring for the sick, but their role in health sciences goes far beyond their traditional role. Women played a leading role in placing hygiene and nursing on a scientific footing. They have also advanced surgical techniques, developed cures for killer diseases, learned about human anatomy, and figured out the chemistry behind some of the biochemicals on which humans depend for their health. This book tells their stories and describes their vital contributions"--