Life on the Mississippi : an epic American adventure 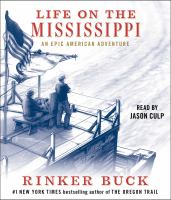 The eagerly awaited return of master American storyteller Rinker Buck, whose last book The Oregon Trail was a triumphant New York Times best seller, this is another epic, enchanting blend of history and adventure in which Buck builds an authentic wooden flatboat from the early 1800s and pilots it down the Mississippi River, illuminating the forgotten past of the river and its grand "flatboat era" that dramatically expanded the country in the decades before Western expansion.