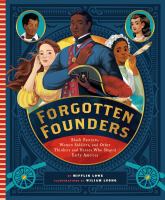 "The founding of America was not accomplished by a handful of people; it required the heart, soul, and grit of an entire nation. Today, we rightfully honor the efforts of the Founding Fathers, but what about everyone else who sacrificed for the cause? Introducing 'Forgotten Founders', the inspiring book of stories about the heroic women, African Americans, Native Americans, immigrants, and others who played pivotal roles in America's birth. Make no mistake: these were no historical footnotes. These were brave men and women without whom the war simply could never have been won and the new republic never begun"--OCLC.