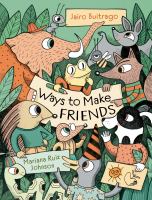 Book
"A quirky and uplifting guide to making new friends for kids 4 to 7 from a beloved, internationally renowned author. What's the best way to make friends? Toad has the most magnificent ideas! Sometimes they don't go according to plan... but that's okay. Eventually Toad tires of making new friends, but comes to a marvelous conclusion: sometimes being with yourself is a good way to pass the time too. A hilarious and heartfelt read for kids who are starting school or experiencing other unfamiliar social situations, Ways to Make Friends will give them the courage to stand on their own--and maybe try one of Toad's unconventional methods to make a friend for themselves."--