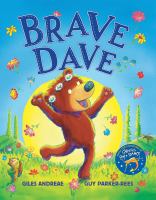 Dave the Grizzly bear lives in the shadow of his big brother, and even when he finds his own talent he is worried that the other woodland animals will laugh at him--until he finds the courage to show them all what he can do.