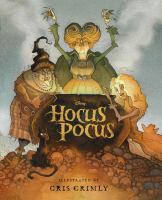 Book
After accidentally bringing the Sanderson Sisters back from the dead, Max, Dani, and Allison race to stop their plans to torment Salem for all of eternity.