The challenge : a novel 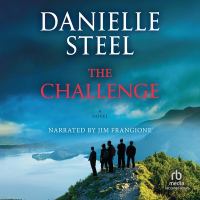 A small community is tested when their children go missing while exploring a dangerous local peak, forcing them to band together during the crisis.