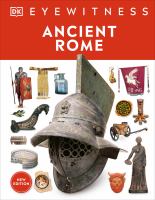 A photo essay documents ancient Rome and the people who lived there as revealed through the many artifacts they left behind, including shields, swords, tools, toys, cosmetics, and jewelry.