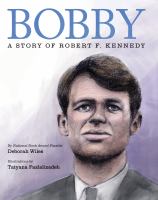 "From two-time National Book Award finalist Deborah Wiles comes a compelling biography about Robert Kennedy. Americans claimed Robert Kennedy as one of their own. They called him Bobby. Lyrical and evocative text by Deborah Wiles (Countdown, Revolution, Anthem, and Kent State) brings the story of Robert F. Kennedy to life, with breathtaking illustrations by Tatyana Fazlalizadeh. Bobby is set in 1968, with a grandfather telling his grandchild about Kennedy's life. Bobby was the younger brother of PresidentJohn F. Kennedy. He became an accomplished public servant and activist in his own right. Though his run for presidency was tragically cut short on June 5, 1968, Bobby proved the value of empathy and grit. The story concludes as his funeral train makes its solemn journey from New York to Washington, DC. Kennedy was perceived by many to be a rare unifying force in American politics. He was beloved by Americans of all races for his integrity and devotion to the civil rights cause. His life continues to inspire efforts for social change. Deborah Wiles's "Bobby" will illuminate the importance of Robert Kennedy's life for children, parents, teachers, and librarians. Informative back matter is included"--