The most magnificent idea 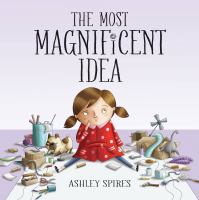 Book
"A girl and her dog are back in this follow-up to the bestselling The Most Magnificent Thing. Usually, the girl is an idea machine -- sometimes her brain is so full of ideas that her hands can't keep up. But today feels different. She seems to have everything she needs to get to work ... but she doesn't know what to make! She searches high and low for an idea. She and her dog go for a walk, they brainstorm, they research, they dig through the entire house, but the girl can't find a single idea anywhere. What if she NEVER has another idea EVER AGAIN?"--