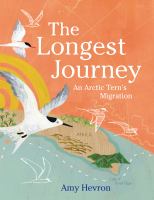 "The story of an arctic tern's first migration to the South Pole and back again"--
"In their thirty-year lifetimes, Arctic Terns travel nearly 1.5 million miles, that's enough to fly to the Moon and back three times! Each year they brave blistering winds, storms, rough seas, and airborne predators as they travel between the Earth's poles, chasing the summer. In The Longest Journey: An Arctic Tern's Migration, we follow one such bird as it spreads its wings and sets out to make its first globe-spanning trip with its flock." -- Amazon.com.