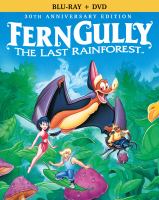 There's magic in the rainforest and it's called FernGully! Deep in the heart of the forest awaits a paradise filled with tiny sprites, winged fairies, and tree spirits who all live in joyful harmony. But when their home is threatened by humans, one courageous sprite gives her all to save it!