The light of days : the untold story of women resistance fighters in Hitler's ghettos 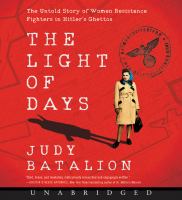 Witnesses to the brutal murder of their families and neighbors, and the violent destruction of their communities, a cadre of Jewish women in Poland helped transform Jewish youth groups into resistance cells to fight the Nazis.