Meanwhile back on Earth 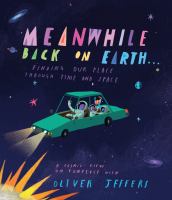 Book
Merging space travel with a road trip, a father drives all over the solar system at 37mph in order to allow his children to view the conflicts of Earth's history in the rearview mirror. Whether it's only been the 78 years it takes to drive to Venus or the 8,000 it takes to get to Neptune, humans have been fighting each other for small pieces of space on our planet.