Iguana be a dragon 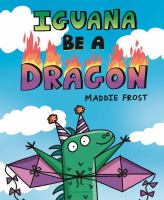 Book
"Iguana is worried he is not amazing enough to go to Cheetah's party, but he soon learns that being himself is always enough"--