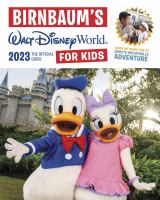 Book
"Walt Disney World honors its fiftieth anniversary with " The World's Most Magical Celebration," an incredible 18-month event that lasts until March 2023. As the resort celebrates and continues to grow and evolve, trust Birnbaum as your 2022-2023 guide for: insider tips for young readers kid-friendly descriptions of all theme park shows and attractions colorful maps, photos, Disney character illustrations, and more Real kids give honest advice for the most awesome vacation at Walt Disney World. Inside we'll also tell you how to: Fly the Millennium Falcon starship, take part in a battle between the Resistance and the First Order, and even drink a glass of blue milk at Star Wars: Galaxy's Edge. See which attractions belong on many kids' "must-do" lists, including the exciting Slinky Dog Dash and the zany Mickey & Minnie's Runaway Railway at Disney's Hollywood Studios. Discover toe-tapping shows and dazzling nighttime spectaculars Get advice from young Disney experts with kid-written tips and attraction reviews Share what YOU think about all your favorite Walt Disney World rides and attractions Hunt for dozens of Hidden Mickeys spread throughout Walt Disney World theme parks Meet favorite Disney characters and collect autographs with special autograph pages at the back of the book Also preserve your memories in a special scrapbook section Planning a trip to the Walt Disney World? Be sure to have all the official guides from Disney Editions: Birnbaum's 2023 Walt Disney World The Hidden Mickeys of Walt Disney World"--