On her wings : the story of Toni Morrison 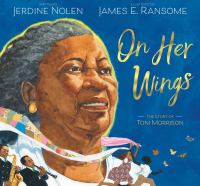 "Born Chloe Ardelia Wofford, she grew up listening to stories and loved reading. As a teenager she worked at the Lorain town library and later attended Howard University. As an editor at a New York publisher, she found time early in the morning and late at night after her children were asleep to write. When she looked about over her life and all what she had seen and learned, she knew she wanted to write about her people, Black people. Today and always her work and legacy will live on"--