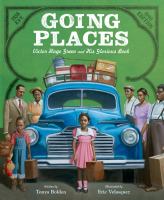 "As a mail carrier, Victor Hugo Green traveled across New Jersey every day. But with Jim Crow laws enforcing segregation since the late 1800s, traveling as a Black person in the US could be stressful, even dangerous. So in the 1930s, Victor created a guide--The Negro Motorist Green-Book--compiling information on where to go and what places to avoid so that Black travelers could have a safe and pleasant time. While the Green Book started out small, over the years it became an expansive, invaluable resource for Black people throughout the country--all in the hopes that one day such a guide would no longer be needed"--Provided by publisher.