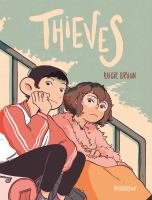 Book
"Um...what happened last night? Ella wakes on the morning after a house party at a mysterious mansion surrounded by a hoard of objects that are definitely NOT hers. With no idea how they got there, she DEFINITELY doesn't need anyone to see her like this-which is precisely when her adorable crush, Madeleine, decides to ring the doorbell and tell Ella that she was robbed last night....At the party....That Madeleine hosted...At her parent's mansion. But all is not as it seeems with sweet Madeleine, and soon the pair become embroiled in a capering scheme to set things right. Can their feelings for each other withstand fixing huge social messes, a final high school exam, and their own, chaotic personal lives? That sure would be nice."--inside jacket.