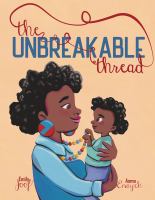 "A bittersweet celebration of the everlasting bond between a mother and child through the changing phases of their lives. The thread begins to unwind when the child begins to walk, talk, and run. It stretches a little more on the first day of school. It swirls and unfurls the further the child gets from Mom's reach. One thing is constant-that it always remains. Emily Joof channeled her Gambian upbringing to pen this story, which was inspired by a local tradition of leaving a thread with the child when a parent travels"--