Bumble & Snug and the angry pirates 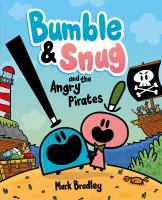 Bumble and Snug are two best friends who just so happen to be little monsters called Bugbops. One day, after getting lost on their way to a picnic, they find themselves on an abandoned island in the middle of the sea where they discover a treasure chest. When angry pirates follow their trail, Bumble and Snug will have to work together to avoid a giant octopus, replace the treasure, and find their way home. This first book in the bright and bold Bumble & Snug graphic novel series seamlessly blends hilarity, friendship, emotion, and adventure for a compelling story that beginning and reluctant readers will want to pick up again and again.