And there was light : Abraham Lincoln and the American struggle 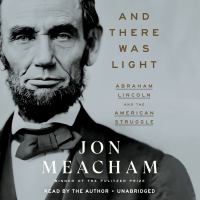 Jon Meacham chronicles the life and moral evolution of Abraham Lincoln and explores why and how Lincoln confronted secession, threats to democracy, and the tragedy of slavery in order to expand the possibilities of America. This book tells the story of Lincoln from his birth on the Kentucky frontier in 1809 to his leadership during the Civil War to his tragic assassination at Ford's Theater on Good Friday 1865: his rise, his self-education through reading, his loves, his bouts of depression, his political failures, his deepening faith, and his persistent conviction that slavery must end. In a nation shaped by the courage of the enslaved of the era and by the brave witness of Black Americans of the nineteenth century, Lincoln's story illuminates the ways and means of politics, the marshaling of power in a belligerent democracy, the durability of white supremacy in America, and the capacity of conscience to shape the maelstrom of events.