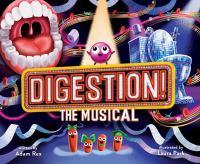 Despite being told that she is nothing but "empty calories," Candy is excited by her big break--being digested by the body, in this humorous exploration of the digestive system, presented as a Broadway musical.