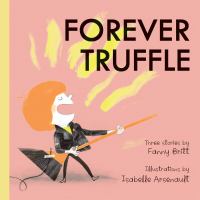 "Fanny Britt and Isabelle Arsenault are back with a new graphic novel, this time featuring Truffle, younger brother, best friend, aspiring rockstar ... Meet Truffle in three linked stories: In "Truffle the Rockstar," Truffle wants to form a band with his best friends Flo and Riad. They can already picture themselves on stage, wowing the crowd with epic songs. They still have to learn how to play instruments ... but that's just a minor detail! Ever since Truffle asked Nina to be his girlfriend, they have been shy around each other. In "Truffle Loves Nina," Truffle asks his parents, his friend Riad, his big brother, Louis, and the man who works at the library, for advice on how to let his heart do the talking. In "Truffle's Thoughts on Existence," Truffle attends his great-grandmother's funeral, which gets him thinking about the world around him. Are grandparents young once, too? Does Rocket, the dog that his family had to give up, still think about him sometimes? Do people stop loving each other if they don't see each other anymore? Fans of Louis Undercover will be delighted that Truffle -- Louis's funny, music-loving little brother -- now has his own book!"--