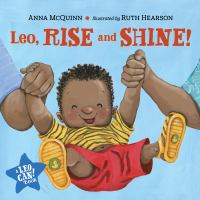 Board book edition ; First US edition.

Leo wakes up in the morning and follows his usual routine of breakfast and getting dressed until he is ready for a new day.