American murderer : the parasite that haunted the South 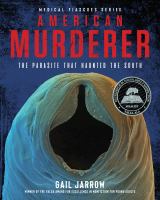 Imagine microscopic worms living in the soil. They enter your body through your bare feet, travel to your intestines, and stay there for years sucking your blood like vampires. You feel exhausted. You get sick easily. It sounds like a nightmare, but that's what happened in the American South during the 1800s and early 1900s. Doctors never guessed that hookworms were making patients ill, but zoologist Charles Stiles knew better. Working with one of the first public health organizations, he and his colleagues treated the sick and showed Southerners how to protect themselves by wearing shoes and using outhouses so that the worms didn't spread. Although hookworm was eventually controlled in the United States, the parasite remains a serious health problem throughout the world. The topic of this STEM book remains relevant and will fascinate young readers interested in medicine, science, history-and gross stories about bloodsucking creatures.