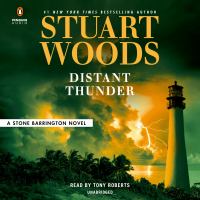 During an intense storm in Dark Harbor, Maine, a perplexing murder lands a dead man on Stone Barrington's doorstep. As secrets swirl around this mystery man's identity, Stone quickly sets out to unravel a web of cunning misdirections and lies. Soon enough, he is embroiled in an elaborate game of cat and mouse between the CIA and nefarious foreign forces, including a bewitching new companion who comes under his protection. But when Stone's actions draw the attention of an old enemy, one who will stop at nothing to prevent the truth from getting out, Stone realizes he may have finally met his match.