Radio's greatest of all time 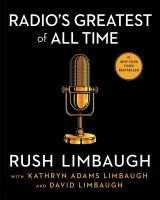 Book
"For more than thirty years, millions of listeners tuned in to hear Rush Limbaugh's voice. He was an unwavering American patriot, a true leader, friend, family member, and voice of reason on the radio. At its peak, The Rush Limbaugh Show aired on more than 650 radio stations nationwide, and his inimitable commentary and distinctive sense of humor garnered an audience exceeding 30 million loyal listeners. By the time Rush reached his pinnacle of success in accepting the Presidential Medal of Freedom during the State of the Union address on February 4, 2020, he was unquestionably the greatest radio broadcaster the world has ever known. Rush's passing due to complications from lung cancer in early 2021 sent shock waves of grief through the conservative community, and many luminaries offered their memories about his enduring legacy. Now, in his honor, Rush's wife, brother, friends, and colleagues, reflect on what made him "America's Anchorman." In this timeless collection of Rush's brilliant words, readers get to see America through his ideas, from behind the Golden Microphone. With commentary from prominent figures and close friends, including President Donald Trump, Supreme Court Justice Clarence Thomas, Governor Ron DeSantis, and others, Radio's Greatest of All Time is the authoritative body of Rush's best work and leaves no doubt about the impact Rush Limbaugh had on the country."--