A Christmas miracle for Daisy 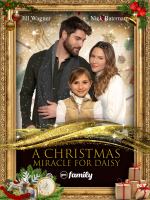 DVD
Whitney runs an interior design firm. She's designing Santa's float for the town's annual Christmas parade when a potential job opportunity comes her way: the full redesign of a landmark home by Christmas Eve. She discovers the home's new owner is Whitney's ex-boyfriend, Connor, who has moved to town from Los Angeles with his bright-eyed, young daughter, Daisy. Connor had no intention of becoming a family man, but when his goddaughter is orphaned, he adopts her and commits to becoming a devoted single dad. More than anything, Daisy wishes for a mom to complete her picture-perfect family, and no prospect is as perfect as Whitney. A tall order, but Christmas is a time for miracles.