The twist of a knife : a novel 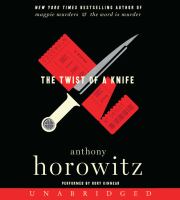 Horowitz becomes the prime suspect in a murder investigation, and only one man can prove his innocence: his newly estranged partner in solving crime, Detective Hawthorne.