City under the city 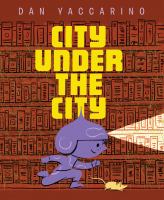 Book
"Bix lives with her family in a city where people rarely talk or play together, and no longer read books. Instead, they stare at small portable screens, monitored by giant eyeballs. The Eyes are here to help! With everything. But Bix would like to do things for herself. Running from an Eye, she discovers another world: the City Under the City. There, she befriends a rat who leads her to a library and its treasure trove of books and knowledge. As she explores the abandoned city, she's thrilled to learn about the people who lived there, with no Eyes. But she misses her family, and decides to head home, where, just maybe, she can help defeat the intrusive Eyes--and show her people how to think for themselves and enjoy each other's company. Told through Dan Yaccarino's stunning graphic style, this page-turning picture book/early reader crossover will spark a new appreciation of reading, books, independence, friendship, and family."--