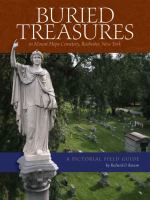 "Through biographic sketches of more than 600 interesting permanent residents of Mount Hope Cemetery, this book becomes a fascinating history of Rochester, New York, America's first boomtown in the early 1800s, the flour-milling capital of the world, the third largest clothing manufacturing center in the U.S, and a horticultural phenomenon. Kodak became the world's photography leader. This was the city of Frederick Douglass and Susan B. Anthony. A Rochesterian founded Western Union Telegraph Company; another Rochesterian started Xerox. Bausch and Lomb created one of the great optical companies. Exxon Mobil was started here as Vacuum Oil Company. A University of Rochester professor founded the science of anthropology. Buffalo Bill Cody created his Wild West Show in Rochester. The voting machine was invented here, as was the machine gun, the internal combustion motorcar, and the fish hatchery. A persistent Hartwell Carver instituted the transcontinental railroad. Frank Gannett launched his publishing empire here. This book brings it all to live, from the tavern owner who operated the best oyster bar in town, to the man who persuaded Czar Alexander to sell Alaska to the U.S."--Back cover.