The lady and the octopus : how Jeanne Villepreux-Power invented aquariums and revolutionized marine biology 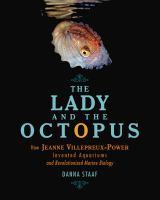 Book
"Follow the remarkable journey of Jeanne Villepreux-Power from her childhood in a small French village to her life as a naturalist in nineteenth-century Messina, Sicily, where she conducted groundbreaking research and invented aquariums"--