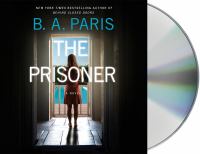 Amelie has always been a survivor, from losing her parents as a child in Paris to making it on her own in London. As she builds a life for herself, she is swept up into a glamorous lifestyle where she married the handsome billionaire Jed Hawthorne. But then, Amelie wakes up in a pitch-black room, not knowing where she is. Why has she been taken? Who are her mysterious captors? And why does she soon feel safer here, imprisoned, than she had begun to feel with her husband Jed?