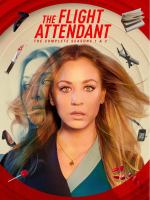 DVD
Scheduled release date: November 29, 2022.
A binge-drinking flight attendant wakes up in an unfamiliar hotel room beside a dead body and sneaks back to her work, telling a series of lies that complicate her ability to figure out what really happened. The events cause her to sober up, and her cover allows her to work for the CIA, but witnessing an international murder doesn't seem to get any easier even when you're being paid for it.