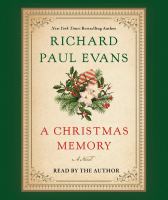 Reeling from the loss of his brother in Vietnam, Richard moves with his family from California to his grandmother's abandoned house in Utah, where he finds the holiday spirit with the help of an elderly neighbor and his dog.