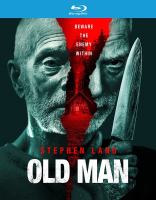 Blu-ray
Scheduled release date: December 6, 2022.
Deep in the woods, a lost hiker stumbles upon the cabin of an erratic and reclusive old man. What starts as a cordial conversation soon turns dangerous as it becomes clear that one or both of them might be hiding a terrifying secret. This horrific and poignant plunge into madness is "a mesmerizing thriller that you won't be able to take your eyes off of" (ScariestThings.com).