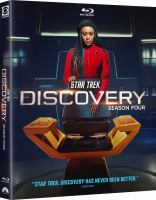 Blu-ray
Scheduled release date: December 6, 2022.
Season Four finds Captain Burnham and the crew of the U.S.S. Discovery facing a threat unlike any they've ever encountered. With Federation and non-Federation worlds alike feeling the impact, they must confront the unknown and work together to ensure a hopeful future for all.